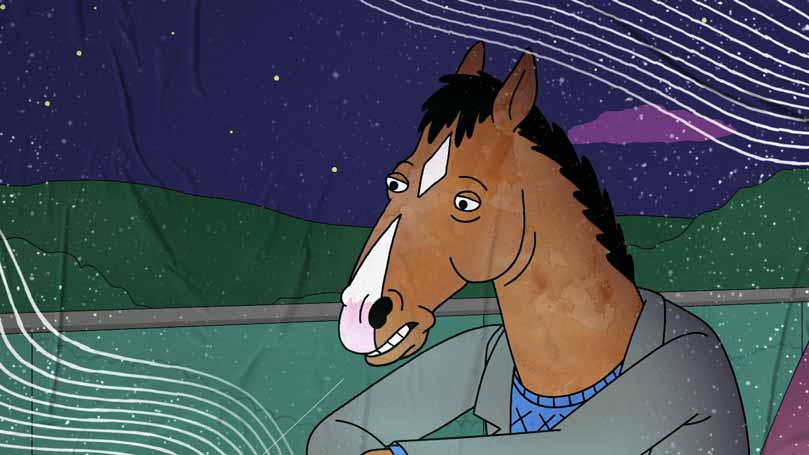 A critically acclaimed series that stresses topics like addiction, sexism, depression, trauma, racism, self-destructive behavior and the human experience is a visual treat with some deep messages. Nominated for tons of awards, the series revolves around BoJack Horseman, a washed-up star of the 1990s sitcom Horsin’ Around who lives in an alternate world where humans and anthropomorphic animals live side by side and plan to resurrect his celebrity status with a tell-all autobiography. With layered jokes, sharp writing and the ability to tell sad stories without sacrificing humor, this series has won the hearts of everyone around the world.

A satirical fantasy sitcom that orbits around Princess Bean, a rebellious and alcoholic princess who lives in the kingdom of Dreamland with her optimistic & naive elf companion Elfo, and her catastrophic “personal demon” Luci. Met with positive responses, this show has everything you expect from it; satisfactory humor, unique and interesting storyline, intriguing concept, alluring cast with charming characters which are very well developed, and excellent jokes that can give you major belly laughs. The sarcasm and humor in this absolutely brilliant show will make you hiccup with laughter.

A ‘must-watch series’ that revolves around the outcast monster hunter Trevor Belmont, who protects the nation of Wallachia from Dracula and his army, when the vampire Count Dracula declares that he will avenge his wife who was burned at the stake after being falsely accused of witchcraft by killing all the people of Wallachia. Based on the video game series of the same name by Konami, the series met with praise from critics for its astonishing visuals, brilliant animations, compelling voice cast, and fantastic story-line. This perfectly executed animated series will leave you with very extraordinary memories.

A Prime-time Emmy Award-nominated series that orbits around the Murphy family, a dysfunctional suburban Irish-American family in the early 1970s. An adult animated sitcom that is outrageously hilarious, very well-written, and flawlessly animated has an amazing voice cast, well-developed characters, and an intriguing story-line. A gem on Netflix, this highly enjoyable series will give you some belly-aching laughter and will leave you with some wonderful memories and nostalgia. The series was admired by the audiences and critics alike.

A critically applauded series that has eye-catching visuals, arresting story-line, astonishing animations, and an alluring voice cast is surely a heart winner of adults as well as children. Large praise from critics was gone to series uniqueness, humor, fight scenes, characters, and animation. This amazing series revolves around Saitama, a superhero who has the power to defeat his enemies with a single punch and who has gone bored with his own supernatural abilities as there is an absence of the evil who can challenge him in the fight, so he seeks to find a worthy opponent.