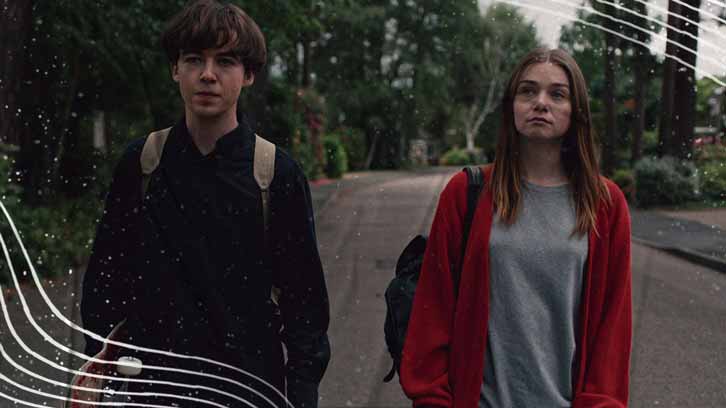 5 Best Binge-Worthy Teen TV Shows: We all are kinda bored with our daily mundane and boring routines, isn’t it? So to save ourselves from that killing boredom we go and enjoy the best binge-worthy teen TV shows on Netflix, and we got our reasons for that. Teen TV shows are one of the most amazing shows out there, they have the incredible cast, intriguing storylines (most of those storylines are relatable), captivating soundtracks, skillful direction & production, noteworthy cinematography, and they hit us with a little bit of nostalgia and reminds us of our own teen years.

Highly acclaimed by the critics, this appealing series is the recipient of tons of awards wins and nominations including BAFTA TV Awards, IFTA Gala Television Awards, and British Comedy Guide Awards. This awesome black comedy British sitcom is set in Derry, Northern Ireland during the 1990s, which was a difficult time in the nation’s history. This amazing series follows a group of teenage friends, Erin, Orla (Erin’s cousin), Michelle and Clare (Erin & Orla’s friends), and James (Michelle’s English cousin). This admirable series portrays how the group of four girls (and their guy friend) explore through their teenage years during the end of the Troubles in Derry. With an incredible plot, lovable characters, skillful direction and production, and brilliantly-written storyline, this captivating series has two seasons (season first broadcasted in 2018 and season second broadcasted in 2019) and its third season has been commissioned for 2020. This incredible show which can give anyone a jolly-good time is a must-watch.

A parody of true crime documentaries, this mockumentary web television series is a true gem on Netflix. Highly praised by the critics and audiences, the plot of the first season follows the after-effect of a high school prank that left 27 faculty cars vandalized with phallic images. Dylan Maxwell is expelled as he is blamed for the wrongdoing by the school. To discover whether Dylan was the person behind the crime or not, an investigation concerning the incident is initiated by Peter Maldonado (a second-year high-school student & aspiring documentarian) with assistance from his friend Sam Ecklund. Like its first season, American Vandal’s second season also won the hearts of critics as well as audiences. The plot of the second season sees Peter and Sam examine another wrongdoing at a Catholic private high school after their cafeteria’s lemonade is contaminated with maltitol by somebody calling themselves “The Turd Burglar.” This intriguing series is a brilliantly-crafted parody of the true-crime shows.

We think a critically acclaimed teen drama television series that is the winner of the Teen Choice Award for Choice Breakout TV Show is a must-mention on this list, isn’t it?! This amazing show follows four teenage friends (Monse Finnie, Jamal Turner, Cesar Diaz, and Ruben “Ruby” Martinez) as they navigate through high school and life in South Central Los Angeles. Dealing with the threat of getting their friend out of a gang and friendship turning into romance, the group’s long-lasting friendship is tested as they explore through the suffering, achievement, and the newness of high-school set in the rough inner city. A teen drama series that you didn’t know you needed, this amazing television series has a coming-of-age story, appealing performances by the cast, and noteworthy direction and production. This binge-worthy show’s one of the most appealing and standout points is that it is relatable, and the characters deal with real issues, which makes this must-watch show even more special.

There is not even a single doubt that the Stranger Things are one of the best Teen TV shows. This incredible science fiction, drama-horror web television series is set in the fictional rural town of Hawkins, Indiana, during the early 1980s. The close-by Hawkins National Laboratory apparently conducts scientific research for the United States Department of Energy. However, they also secretly does experiments into the paranormal and supernatural, including those that contain human test subjects. Accidentally, they have made “the Upside Down”, an entrance to an alternate dimension. In November 1983, Will Byers is kidnapped by a creature from the Upside Down. Joyce (Will’s mom), and Jim Hopper (the town’s police chief) search for Will. Simultaneously, Eleven (a young psychokinetic girl) break free from the laboratory and helps Mike, Dustin, and Lucas (Will’s friends), in their own attempts to find Will. This widely acclaimed and highly popular series is praised for its directing, characterization, acting, writing, and soundtrack.

Based on a graphic novel of the same name by Charles Forsman, this intriguing British dark comedy-drama television program is a perfect option to binge-watch on a relaxing weekend. A 17-year-old James is pretty sure that he is a psychopath. As a hobby, James kills animals however becomes bored with the practice. He decides he wants to try killing a human. He chooses Alyssa, his loud-mouthed & rebellious 17-year-old classmate who has issues of her own. Alyssa suggests she and James should flee together, expecting for an adventure away from her chaotic home-life. James accepts this, with the aim of finding a chance to kill Alyssa. They begin a road trip across England and start to build up a relationship after a number of unlucky incidents. Highly appreciated by the critics and admired by the viewers, this brilliantly-crafted TV program has been nominated for the Primetime Emmy Award for Outstanding Cinematography for a Single-Camera Series (Half-Hour).