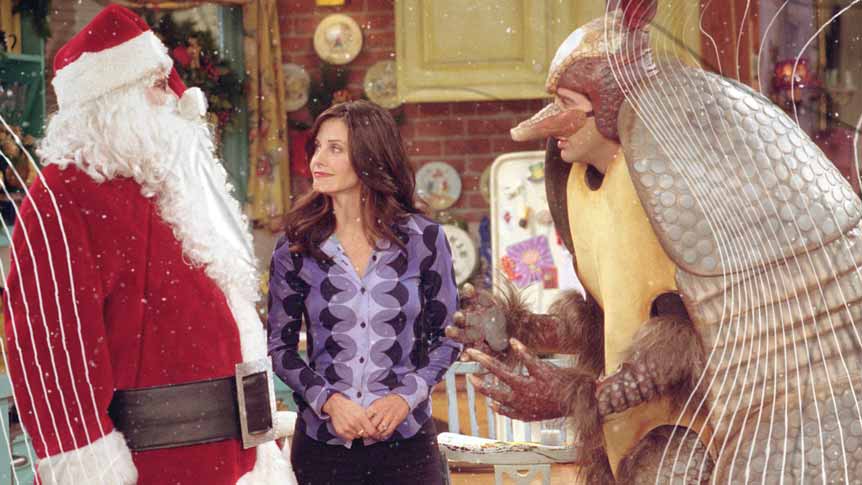 Christmas is almost here, and we are feeling festive. Holiday season means we all are about to have the best time of the year. The festive season is loved by everyone for obvious reasons – mouthwatering food, relaxing holidays, fascinating snow-falls, eye-catching decorations, melodious carols, and these 5 Best Christmas ‘Special’ TV Episodes that get all of us in the holiday spirit.

In cold-snowy nights, cuddling with your loved ones under one blanket and watching these Christmas TV show episodes with a cup of hot chocolate is one of the most precious and unforgettable time one could ask for. We all adore TV shows and at the festive season, the Christmas TV Show Episodes which have holiday drama, festive spirit, amusing Christmas time humor and tons of Holiday cheer are a must-watch.

So, here we present you our picks of 5 Best Christmas ‘Special’ TV Episodes that will get you in the holiday spirit –

This episode is so amusing that you will laugh your head off. Phoebe brings in her late mother’s Christmas memorial candy dish, shaped like a skull. Ross wants to introduce Ben to Hanukkah but Ben loves Christmas. In order to lure Rachel to move back into their renovated apartment, Phoebe gives Joey various gifts, including a spider that scares Joey more than Rachel and a drum kit that irritates Monica. Ross dresses up as Santa’s Tex-Mex friend a “Holiday Armadillo” to explain Ben about Hanukkah and Chandler appears as Santa to help out Ross.

In this delightful episode, Leslie tries to keep herself busy during her suspension from the department & becomes a super-organizer for a citizen action group in Pawnee. Everyone in the staff plans to create the most gracious Christmas gift for Leslie they can think of, in order to pay her back for her many years of extraordinary courteous presents. Ben goes on afflictive private-sector job interviews before getting good advice from an unexpected source. Leslie’s City Council campaign incurs losses until her friends and co-workers unite afresh to help her out.

In this intriguing episode, Kate is troubled with appendicitis, the Pearsons take her to the hospital and find Dr. K there, who needs their support after a potentially fatal car accident. In the present, Kevin convinces Sloane to take Olivia’s role, after Olivia left the play. Kevin celebrates Hanukkah with Sloane’s family & Sloane joins Kevin at Randall’s Christmas Eve party. Kate pursues her big surgery. Randall talks Andy out of a suicide attempt. William is revealed to be bisexual. Toby comes to Randall’s house to surprise Kate and they get back together, however, he later collapses and is sent to the OR.

In this delightful episode, Michelle and Stephanie are busy making extra long Christmas lists, while other members of the Tanner family are not feeling so festive. Danny misses Vicky and is sad that he won’t be spending Christmas with her. However, Vicky ends up surprising Danny. D.J. finds out that upon graduating, Steve is planning to move to Florida for college. Becky misses white Christmases of her childhood in Nebraska. Jesse tries to cure Stephanie and Michelle’s gift obsession by taking them to a homeless shelter to show them the real meaning of Christmas.

With highly positive reviews from television critics, this episode is a Christmas must. The office staffers hold a “Secret Santa” gift exchange at their Christmas party, but the party turns into a disaster when Michael Scott decides to give all employees the ability to exchange each other’s Secret Santa gifts by playing “Yankee Swap”. Jim Halpert, having put a lot of thoughts & efforts into finding a gift for Pam, becomes frustrated with Michael’s idea. While Michael seeks to get a better gift, the iPod that Michael originally bought for Ryan becomes the hot object of the game with all of the staff trying to win it. Seeing that his idea has ruined the staff’s mood, Michael disobeys company policy and buy alcohol for everyone at the party to compensate.

In this well-crafted episode, an argument over a young boy’s heart transplant treatment reveals major religious differences between Burke and Cristina. The interns unite to help Alex prepare to re-take his exam, however, Izzie feels betrayed by this and Meredith reminds her of the true spirit of Christmas. Derek performs brain surgery on the patriarch of a mixed Jewish/Christian family who discusses celebrating Chrismukkah. Despite a reconciliation with his wife, Derek still feels less than festive. George has to handle the family of a woman whose surgery for bleeding ulcers keeps on getting postponed due to more important surgeries. Bailey performs several surgeries when Webber is forced to leave her on her own.

Jess and the gang had their share of Christmas excitement in this pleasing episode. As the gang prepares to depart for the holidays, they arrive at the Los Angeles International Airport and learns that the airport is in chaos as most of the flights are delayed. Ryan invites Jess to meet his family in England for Christmas. However, after seeing Ryan’s family’s house, Jess is worried that she is not good enough for them and gives up when her gifts are stolen by a perverted Santa. Coach wants to go vacationing instead of seeing his sister and niece. Schmidt and Cece decide to sneak into a first-class airport lounge.