5 Best Emily Blunt Movies Which Are A Must-Watch: ClipHash Picks 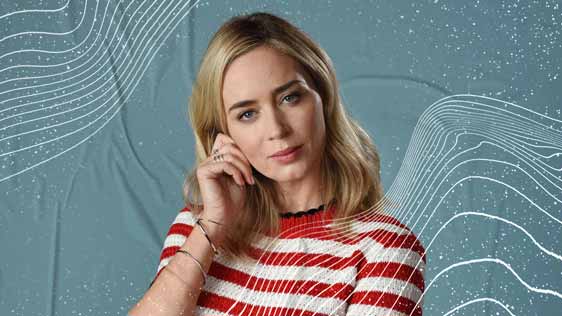 5 Best Emily Blunt Movies Which Are A Must-Watch

5 Best Emily Blunt Movies Which Are A Must-Watch: It is a no brainer that the incredible Emily Blunt is amongst Hollywood’s one of the most beautiful and extremely talented actresses. Since her theatrical film debut in 2004 with “My Summer of Love” to her latest “A Quiet Place Part II” (releasing on 20th March 2020), Emily Blunt has been the part of one of the most acclaimed and highly successful movies. Recipient of tons of awards wins & nomination, this English-American actress has won numerous accolades including the Golden Globe Award, BAFTA Award, Screen Actors Guild Award, and Critics’ Choice Movie Award.

Married to actor John Krasinski and mother of two children, this 37-years-old actress made her own place in the entertainment industry and deepened her love in the hearts of fans by appearing in various TV shows like “Empire” (2005 TV series), “Henry VIII” (TV serial), and “Saturday Night Live”. So if you are also a die-hard fan of this insanely talented and breathtaking beautiful actress, then here at ClipHash we’ve created the list of 5 Best Emily Blunt Movies Which Are A Must-Watch:

One of the most remarkable releases of 2018, this science fiction horror film received high critical acclaim and was a major box-office success. In this Academy Award-nominated movie, a post-apocalyptic world is inhabited by blind extraterrestrial creatures with an acute sense of hearing. As the deadly creatures hunt by sound, even the slightest whisper can bring death. In this new era of complete silence, the Abbott family struggles to survive. However, Lee Abbott and Evelyn Abbott are determined to figure out a way to ensure the protection of their children, while desperately trying to find a way to fight back and survive from the indestructible and armored skin creatures. This incredible cinematic piece accomplished to maintain such thrill, intensity, and a scary atmosphere that it was quite terrifying to make a sound after watching this amazing movie.

This remarkable commercial success which won the hearts of critics appeared on the various top ten lists for the best films of 2012. In the future world, time-traveling is invented, but it is illegal and is just accessible to those with a way to pay for it on the black market. Though time-traveling technology is outlawed, it is used by the mobs. When the mob wants to kill someone, they will send the target into the past, where a hired hitman known as a “looper” is waiting to finish the job and disposes of the body of the target. Joe is one such hired loopers, and he carries out his responsibility well. Life is good and Joe is getting rich, until the day his bosses decide to “close the loop” and send Joe’s future self back in time so as to be killed. With an incredible cast and intriguing storyline, this science fiction action movie is a must-watch.

Highly praised by the critics and recipient of tons of awards wins and nominations, this action thriller film can give you an unforgettable cinematic experience. This masterfully crafted movie follows Kate Macer, a principled FBI agent. After ascending through the ranks of her male-dominated profession, Kate is enlisted by a government task force for a top assignment. Recruited by enigmatic Matt Graver (a government official), Kate joins a team for the escalating war against drugs. Led by a secretive consultant who has a questionable past, the team traverses through the U.S.- Mexican border and sets out on a dangerous assignment that forces Kate to question everything she believes in order to survive. Appreciated for performances by its cast (particular praise going to Emily Blunt & Benicio del Toro), this movie has got everything you are searching for in an awesome cinematic piece.

This science fiction action film takes place in the near future in which an alien race called “Mimics” has attacked the Earth. The extraterrestrial invaders seem to be invincible and are unbeatable by any military unit in the world. Major William Cage is a public relations officer with no combat experience. William has been forced to join a landing operation against the aliens by his superiors. Killed within minutes, William finds himself tossed in a time loop that makes him experience the same brutal combat, his fight, and his death again and again, with some memory of events. However, alongside Sergeant Rita Vrataski, William’s combat abilities improve with each fight through the repeated days. As William and Rita take the fight to the aliens, each repeated encounter gets them one bit nearer to conquering the aliens. With acclaim from cinema lovers for its intriguing plot, jaw-dropping action sequences, and performances by its cast (particular praise going to Emily Blunt & Tom Cruise), this brilliantly-crafted movie will surely keep you at the edge of your seat all the time.

Jack struggles emotionally after his brother’s death Tom. Iris, late Tom’s best friend offers her family’s island getaway to jack so that he could recover there in solitude. Jack bumps into Iris’s sister Hannah who is also under remorse for her recent break-up from a 7-year long relationship. One evening, both Hannah and Jack drink one whole bottle of tequila which causes a sexual incident between them. Things get worst when Iris enters the Cabin the next morning. This dramedy is full of twisted tales and humor with spectacular and heart-touching performances by the cast.

Recipient of tons of awards and nominations including the Academy Award for Best Animated Feature, this critically acclaimed and commercially successful movie is a fictionalized biopic of Jiro Horikoshi. Inspired by the renowned Italian aeronautical designer Caproni, Jiro has a cherished ambition of flying and designing beautiful airplanes. Nearsighted from an early age and thus unable to become a pilot, Jiro joins the aircraft division of a significant Japanese engineering company in 1927. This awe-inspiring movie shows us much of his life, and portray important historical events that greatly influenced the course of Jiro’s life, including the Great Kanto Earthquake of 1923, the Great Depression, the tuberculosis epidemic, and Japan’s plunge into war. He meets and falls in love with Naoko, and develops & appreciates his friendship with his colleague Kiro Honjo. A remarkable innovator, Jiro becomes one of the world’s most innovative and skilled airplane designers. This visually-captivating animated historical drama film which has an incredible story is a must-watch.