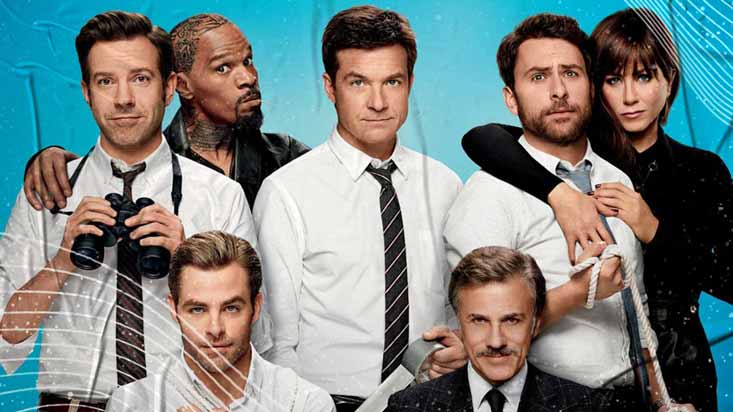 5 Best Hilarious Movies On Netflix: In this difficult phase of life, when we are confronted with all the negative news and the increasing danger of the pandemic, we really need some good humor and light-hearted entertainment. Quarantine is hitting us hard and our only savior is the online streaming services and when we talk about those, Netflix is the first popping in our mind because it never fails to bring us a good list of movies in any genre.

So, We have assembled 5 Best Hilarious Movies On Netflix that will give you belly-ache laugh and a jolly good time…

It is a post hangover comedy that could lead to a crime. This is a hilarious movie that every 9 to 5 job workers could relate to. The cast performance is excellently fun and their chemistry is great. The story revolves around three friends Nick, who is tortured by his boss for working from almost around the clock, Dale, whose lady boss tortures him sexually when he is about to get married, and Kurt, who was good with his job until his boss’s psychopathic son undertakes the company. One day, three of them, drunken, discuss how to kill their boss, and even hire a murder consultant to execute their plan.

Directed by Todd Phillips, this is a quite humorous movie with an amusing plotline. This is a true delight that will give you a jolly good time. With witty dialogues and charming performances, The Hangover is wild and crazy with outrageous comedy. The plot follows a groom-to-be, Doug Billings throws a bachelors bash in Las Vegas. Next day three buddies of Doug,  Phil Wenneck, Stu Price, and Alan wake up with no memory of last night and finds that the groom is missing. Three of them embarks on the hilarious journey to the city to find Doug before his wedding.

This is a humorous movie which is also gruesome. Directed by David Gordon Green, who is known for the movies filled with brooding drama, he tried his hand on comedy and for major of the audience it worked out well. This is a buddy-comedy film packed with action. The story revolves around two pot-smoking friends (Seth Rogen and James Franco) who falls into the hot water after witnessing a murder and meanwhile, under panic dumps the very rare drug at the spot named Pineapple express. Both of them run for their lives as the criminals, in rage finds the fastest way to kill them.

We go aww over the pleasing and cute look of panda every time. The dream works animation release, Kung Fu Panda is a fascinating film filled with humor, wit, and, character. Moreover, it’s to the point detailed animation is spellbinding. The story is about a lethargic slacker panda named Po who works in his family’s noodles shop. But destiny takes him to the world that he always wished for- Kung Fu where he learns with his idols Tigress, Crane, Mantis, Viper, and Monkey, under the mentorship of their guru, Master Shifu. But a treacherous snow leopard, Tai Lung on which China’s fate hangs. Po, who was underrated by everyone turns out to be the savior of the nation.

The Dictator is a laugh out loud comedy film. This epic comic from Sacha Baron Cohen is filled with sharp satire and gross-out gags. The plot follows an ego-maniac dictator named Aladeen of the republic country Wadia, who is hated by literally everyone in his country. One day he is summoned to New York to a UN assembly but the eccentric dictator is caught by someone who shaves his signature beard and tries to kill him, However, Aladeen escapes. Meanwhile, a double of Aladeen goes to the assembly announcing that he is planning to convert Wadiya to a democratic country which is totally opposite to the motives of Aladeen.

Between Two Ferns: The Movie

One can not miss this movie when it comes to the best hilarious movies. Packed with belly-aching humor and scattershot adventure, Between Two Ferns: The Movie will cover your requirement of a comedy movie. Also, the performance of Zach Galifianakis was quite hilarious and highly appreciated. In the movie, he wanted to become a celebrity. However, he becomes a viral laughing stock as a public tv show uploads his video. Now, Zach and his crew embark on a road trip for a series of high-profile celebrities to restore his reputation. This Rofl comedy is a must-watch for a lover of comedy-genre movies.