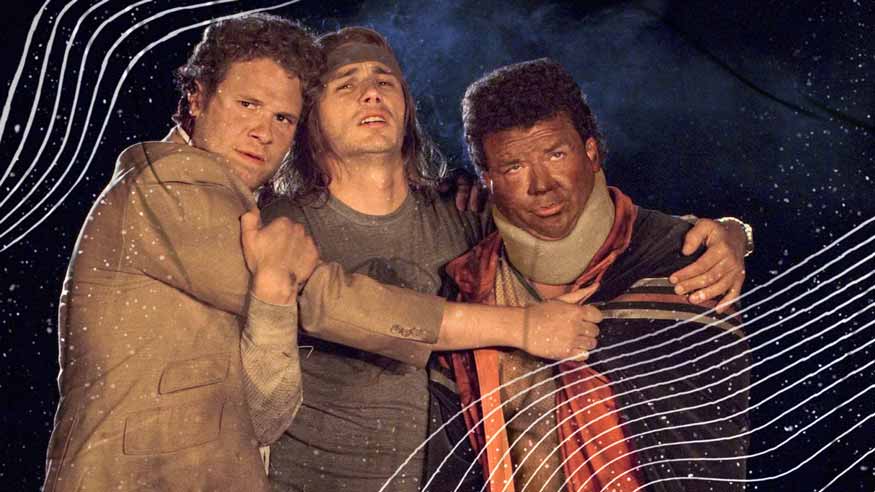 5 Best Stoner Movies: The following movies are not particularly stoner movies but these are fun and entertaining. Stoner Movies may not necessarily have a logical story or meaning in it but it is filled with weird performances, vivid colors, dumb characters, and random storyline. There are many stoner movies in Hollywood, from among them here at ClipHash, we have assembled 5 Best Stoner Movies that should not be missed, as these are the ones that will give you a good source of entertainment, thrill, and laugh…

So these are the 5 Best Stoner Movies:

This is a humorous movie which is also gruesome. Directed by David Gordon Green, who is known for the movies filled with brooding drama, he tried his hand on comedy and for major of the audience it worked out well. The story revolves around two pot-smoking friends (Seth Rogen and James Franco) who falls into the hot water after witnessing a murder and meanwhile, under panic dumps the very rare drug at the spot named Pineapple expresses. Both of them run for their lives as the criminals, in rage are anxious to find the fastest way to kill them.

The Big Lebowski is a laugh-out-loud comedy which is also a caper-thriller with an intriguing complex case of misunderstanding, treachery, and a mysterious kidnapping. The plot follows “The Dude” Lebowski (Jeff), who is mistaken for a millionaire Lebowski by the thugs who have kidnapped him for the ransom. The dude seeks compensation for his ruined rug and calls for help from his bowling buddies. However, things get even more complicated for him due to the deception and people’s hidden intentions.

It is a cheerful and light-hearted movie that will give you a jolly one and a half hours. The joyous relationships among the cast could be seen on the screen, so you’ll enjoy their chemistry too. Six celebrities of Los Angeles get together at James Franco’s for the heart-warming house party. However, suddenly the rapture hits and the apocalypse begins. Now the squad is stuck inside and they not only have to face the apocalypse but also themselves.

This occasionally silly and often delightful movie is a perfect binge-watch that will not cease to amuse you. The story revolves around a lobby boy,  Zero Moustafa (Tony Revolori), and a legendary concierge, M. Gustave (Ralph Fiennes) who even satisfy the sexual needs of the elderly women guests, at The Grand Budapest, a famous European hotel during the wartime. It is a brilliant plot that follows a stolen priceless Renaissance painting and the battle for an enormous family fortune.

Directed by Tony Scott, True Romance is humorous, dirty, and gruesome movies. The story follows a pop culture fan, Clarence Worley who falls in love with a call girl named Alabama Whitman that he finds out after they go for a date and had a one night stand. Clarence accidentally gets drugs from Alabama’s pimp. The couple decides to fly away with the drugs and tries to sell them in Hollywood for living a happy life ever after. However, the furious owner of the drugs is behind them to claim his possession.

Alice in Wonderland is a stoner movie with an intriguing plot and amazing visual effects. In this movie, Alice falls down into a mysterious rabbit hole and reaches a weird and exciting place where she reunites with her old friends. Alice discovers her destiny and fate as she finds that she has to save the place at any cost from the Red Queen, who is trying to claim it.