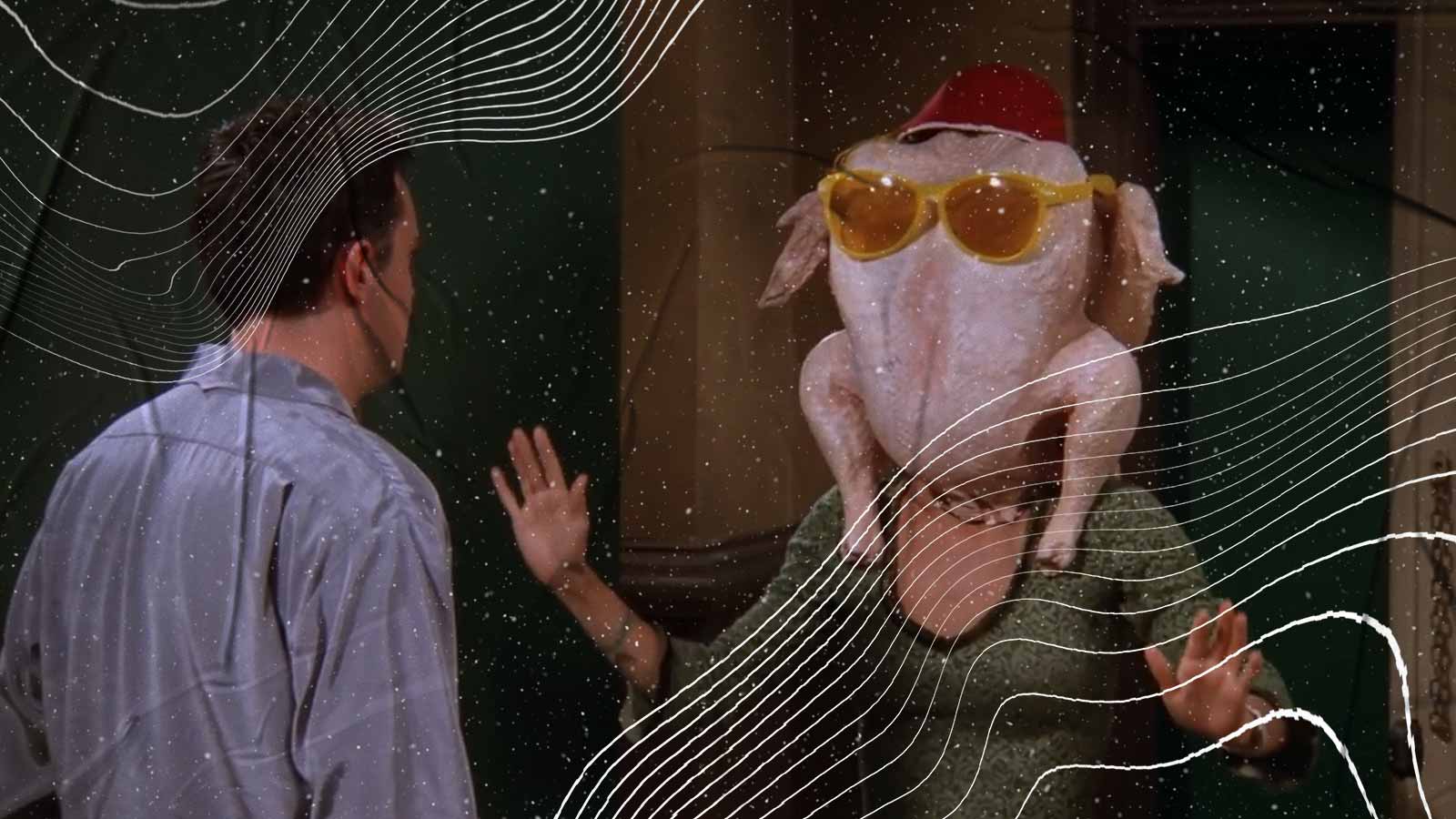 “It’s Thanksgiving And We Should Not Want To Be Together, Together!”, you could relate to the words of wisdom said by Rachel. F.R.I.E.N.D.S has given us some of the best memorable and belly-aching episodes each year. From the underdog balloon escape to Monica putting the turkey on her head, friends never fail to make us laugh out loud. Here are Best Thanksgiving Episodes From Friends.

So as the Thanksgiving is around we are here with the list of best to good (we won’t call it worst, ‘cause none of the episodes is) thanksgiving episodes of F.R.I.E.N.D.S:

The first thanksgiving of friends is loaded with chaos and humor. Ross gets upset when he realizes that his parents went on vacation without informing him, Chandler reveals that he hates thanksgiving, Joey could not go home as he appears as the face of VD on posters all over the city. Eventually, the Underdog balloon escapes the Thanksgiving Day Parade and when they come back from the roof after watching the giant, realize that they have locked themselves out of the apartment, Monica’s cuisine for thanksgiving gets ruined and Rachel miss the plane. All of the f.r.i.e.n.d.s end up celebrating thanksgiving by eating sandwiches.

The episode is full of instances that will give you belly laugh as Monica invites one of Ross’ old friends, Will, who discloses that he and Ross back in high school created an “I hate Rachel” club and spread a rumor that Rachel had both male and female sexual organ. Whereas Joey, being “Tribbiani” makes it hilarious as he tries to eat the whole turkey by himself and wears phoebe’s maternity pants claiming that now they are his thanksgiving pants.

Joey imprisons Chandler into a wooden box as a punishment of kissing his girlfriend and the episode becomes more funnier as Chandler hilariously keeps cracking jokes from inside the box in the entire episode. Monica hurt her eye and calls for an eye-doctor who turns out to be his Ex-boyfriend’s son. Monica attempts to date him allowing the squad to make fun of her. The episode gets amusing as Ross and Rachel bicker over exchanging gifts and Ross finds that Rachel exchanged gifts that he gave to her when they were dating.

When Monica and Ross’ parents decide to come over their apartment on thanksgiving, Monica and Chandler could not figure out how to tell them that they have been dating. Geller Parents hated Chandler as they thought that Chandler used to smoke pot back in college. Monica and Chandler try to convince Ross to tell their parents the truth and they hilariously end up disclosing all their secrets to their parents. Meanwhile, Rachel tries to cook the thanksgiving cuisine and screws it up cooking some half an English Trifle, half a Shepherd’s Pie which joey eat anyways because he is Joey.

“The flashback episode” is a fully-loaded episode as it is filled with many jokes and hilarious throwbacks. Chandler remembering how his parents got divorced when he got to know that the houseboy who used to ask him “More turkey, Mr. Chandler?” slept with his father, Joey gets the dead animal(turkey) stuck on his head, Chandler calling Monica fat and Monica in attempt to seduce young-adult Chandler ends up cutting off his toe. To apologize, She puts the turkey on her head and Chandler ends up in the ER confessing his love for Monica.

“The one with Rachel’s other sister” (Season 9, Episode 8)

The episode revolves around Rachel’s older sister Amy (Christina Applegate), who is a stirrer and insults everyone around her as usual and is certainly an unlikeable person. Amy gets offended when Ross and Rachel deduce that if they died, the custody of their baby Emma would be given to Monica & Chandler and not her. Meanwhile, joey, while watching thanksgiving parade on TV realizes that he is supposed to be at the Macy’s Thanksgiving Parade with the cast of Days of Our Lives. Even though Chandler breaks Monica’s china plates, the episode ends with the “happy ending”.

The squad instead of watching football, sitting on the couch decides to go out and play against each other. The episode becomes more relatable as the Geller siblings get more aggressive and rivalry over the “Geller Cup”, this is the reason why Ross and Monica were once banned by their parents to play the sport together when they were young. While playing, Chandler and Joey try their best to impress the dutch girl, making us laugh out loud.